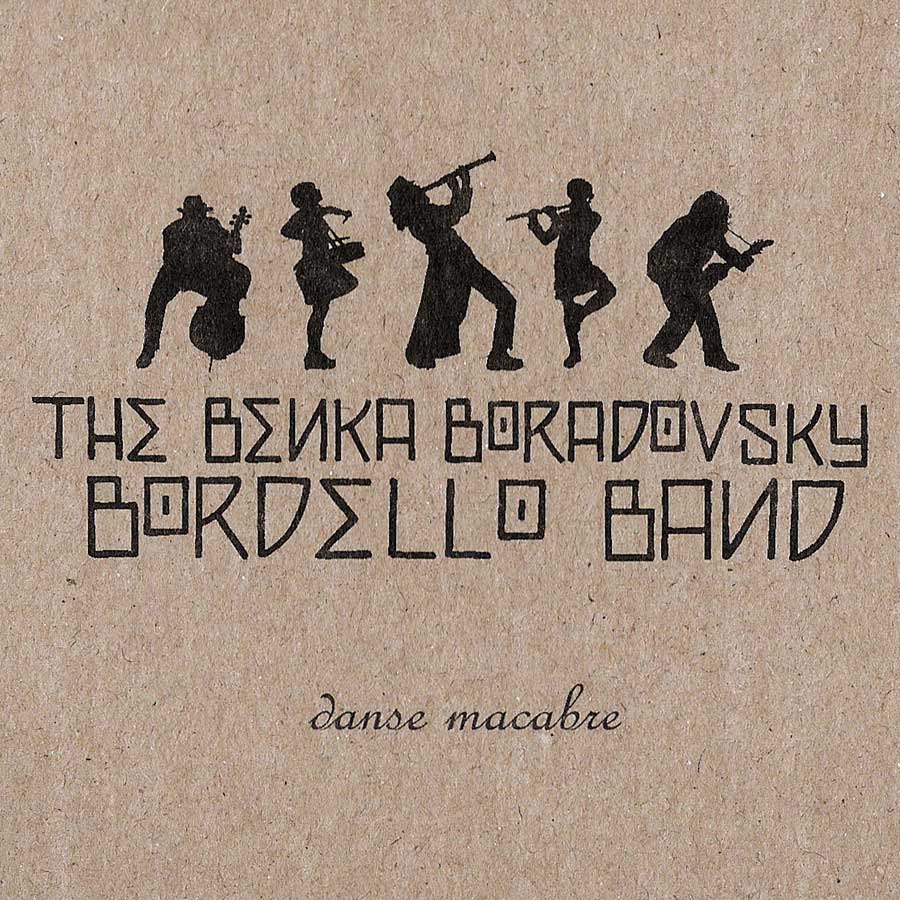 Hailing from the slums and ghettos of Auckland (the Prague of the South), The Benka Boradovsky Bordello band is a highly theatrical musical group specialising in music of Eastern European, Gypsy and Jewish flavour, along with some Western European influences. With music ranging from old to new, originals to standards, vocal to instrumental; they are remarkable in their ability to get everyone up and dancing, regardless of age, musical taste, or level of drunkenness. Benka’s globetrotting voice sings in a wide variety of languages, with lyrics in Russian, Greek, Serbian, Romani, Arabic, Hebrew, Spanish, English and more. If references are necessary, they sound like Tom Waits, Shane McGowan and Franz Kafka drunk too much vodka and thought they were in 1950’s Yugoslavia.

History
After first emerging from an alleyway behind Auckland’s Wine Cellar sometime in the May of 2006, under the guise of Kapitan Shakirov’s Krazy Klezmerim; there has been a vague aroma in the air… a sprinkle of klezmer and a lingering hint of the Eastern Europeanesque with an exhalation of the Romani, well disguised behind the scent of whiskey and sweat. But when the Kapitan himself, Mr Daniel Dumnov, embarked on a trip back to his native Russia, the band had to reform, and Benka furtively grabbed the reins. Through other tribulations, such as The Blackbird winging off to the Bourne of Mel, Benka Boradovsky brought several new players under his bearded wings and the band is now ready to continue spreading its lingering and addictive scent across the country and indeed, the world.

The Benka Boradovsky Bordello Band is the most un-kiwi sounding kiwi band imaginable. While the title Danse Macabre comes from the French translation of The Dance Of Death, the EP sounds more like it hails from around the campfire of an Eastern European gypsy camp. Although four of the five tracks are traditional compositions it is still no mean feat that they have all the essence of another time and place. The band justifies this cultural discrepancy by calling their hometown Auckland “the Prague of the South”. Emanating seemingly unlimited passion and desire, the group’s charm is also rooted in their playfulness. This spills right down into the fact that after the instruments are credited, their band roles are allocated from licentious flirtations to coy glances and devilish grins. Best served with a generous helping of alcohol, preferably vodka, to get in the generously lubricated spirit of the recording. ***** (five stars)
Sharyn Croft, Groove Guide

In the period known as the Holocaust, Nazi Germany did its best to rid the world of Jews and Gypsies forever. I never understood why. Needing a scape goat aside, why pick on the Jews and Gypsies, why not pick on someone worth targeting, like the French. Over fifty years later, in a small British colony on the edge of nowhere, the Benka Bordadovsky Bordello Band capture a Jewish, Gypsy feel with breathtaking effectiveness, and the reason becomes clear. If bands like the Benka Bordadovsky Bordello Band started playing more often, they could end productive labour forever, instead fuelling a mass orgy of vodka, camp fires and music that conservatives and Germans have feared since the beginning of time.

Hailing from the “Prague of the South” (Auckland), the five-piece band have been in hot demand all summer, playing at the Prana, Jamalaya, Parihaka and Splore festivals, as well as a hugely successful national tour. At first, the music strikes as a rather annoying cultural rip off, but once you feel it running through the veins, spilling out through copious consumption of vodka and passionate embrace of the nearest compatriot. When you grow tired of the melodic whine of the clarinet and playful piping of the flute, an electric guitar starts ripping out a solo, and without ever testing the flow of the music. Some songs dominated by incomprehensive string of various languages, the single “Dance Of Death” lights the feet on fire with playful and sinister lyrics, beautifully delivered by the lead singer and heart of the band, Benka Boradovsky.

Nothing like you have heard from a New Zealand band in the past, and thank god for that. If you prefer your music served by the formula, steer well clear, but if you like something different, with a touch of vodka and lots of dancing, their first EP is now available all in record stores for a few dollars and a small piece of your soul.
Norville Barnes, Canta

Frenetic and bawdy, the eclectic BBBB have a gypsy/klezmer/Eastern European-thing going on that is very addictive and slightly unhinged. With raw, heavily accented vocals and feverish instrumentals, the band play traditional, new and original songs in a range of languages, from Russian to Arabic, English to Hebrew. It’s funny, energetic and simply irresistible.
Shelley Howells, Kia Ora Magazine

New from Auckland – although you’d be forgiven for thinking you’d just stumbled into a drunk Greek wedding – comes the delightfully named Benka Boradovsky Bordello Band, a five piece band bringing the flavours of Eastern Europe to the dancefloor – or theatre – near you. Danse Macabre is a five-track ep of highly energetic and entertaining music, soaked in the style of Balkan, Jewish and Gypsy flavours – klezmer it’s called. It sounds like it was recorded live, with the drunken, sneering ramblings of lead singer Boradovsky interspersing the tracks over an enthusiastic and engaged audience. It creates the feel of a live action Greek party, full of exuberance and passion. A fun listen, and it’s a good calling card for what promises to be a mad show. Four of the five tracks are credited traditional, with the frenetic flute playing of Chusidl and their rendition of the classic Greek standard Miserlou (most famously given new life by Dick Dale’s surf guitars in the ‘60s and rebirthed on the Pulp Fiction soundtrack) standing out. All good, fun stuff. It makes you want to kick up your heels and dance like a Cossack.
*** Phil Reed, Real Groove

(The) debut ep is a good introduction to the band’s idiosyncratic approach and skilful, passionate musicianship, with the combination of traditional and original material.
Amanda Mills, Real Groove