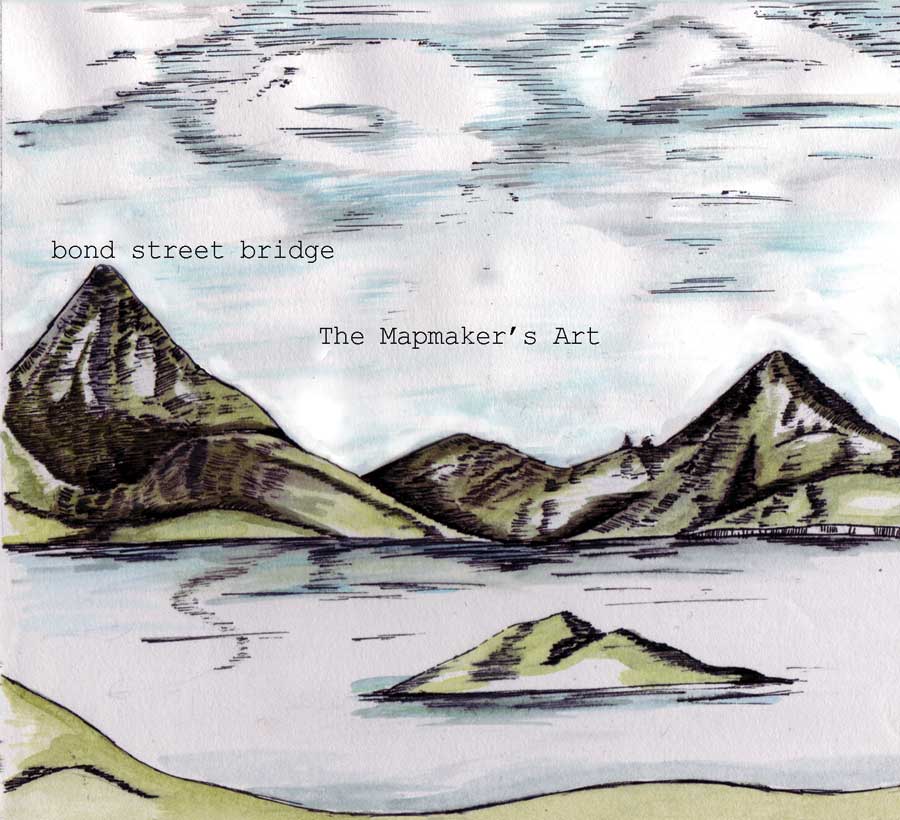 Bond Street Bridge is the creation of Auckland-based multi-instrumentalist and songwriter Sam Prebble.  Sam has been playing music for as long as he can remember, and ‘probably before that as well,’ as he puts it. Bond Street Bridge is currently a solo project, but Sam has always played in bands, orchestras and choirs.  For the past few years he has been playing in the Broken Heartbreakers and Reb Fountain’s Bandits, and has recently guested on releases by White Swan Black Swan, Dylan Storey and Andy Gibson, playing fiddle and writing string arrangements.  Sam’s experience in bands and orchestras has developed the strong sense for arrangement and orchestration he brings to his debut album, ‘The Mapmaker’s Art.’  Listening to the lush soundscapes and cunningly interleaved parts on this record, it is hard to believe that it was recorded on a laptop with one microphone, in a falling-down villa next to a motorway.

Working by himself, Sam had the luxuries of time and creative free rein, which he used to craft a unique and original record. The result is an often surprising collection of songs dealing with what Sam describes as ‘the details of daily life – extinct giant birds, storms at sea, pointless wanderings in the desert, demonic temptation and the like.’ This is imaginative and refined songwriting which achieves both honesty and enigma; slightly detached but never cynical, concise but never terse.

The record uses a sonic palette consisting of guitars, violin, mandolin, piano, organs, percussion and vocals, all played by Sam, with double bass on two tracks provided by Wellington-based artist Kate Whelen.  These organic and acoustic elements are complemented and supported by glitchy beats, warm reverbs and washed-out tape echoes, producing an overall sound which is at once nostalgic and innovative.  Jangly mandolins ride comfortably on top of rolling basslines, and fiddle lines trace paths through a forest of computerised beats.

This album, while fresh and original, pays homage to the artists whose work has influenced Sam over the years.  The influence of New Zealand artists such as Demarnia Lloyd and Cloudboy, Bachelorette and SJD, as well as international artists such as Bjork, Beck, New Buffalo, Neko Case, Thom Yorke, Neil Young, Bob Dylan and Leonard Cohen is audible on this record.  In creating this work, Sam also drew inspiration from writers, painters and filmmakers, among them Ursula Le Guin, Hone Tuwhare, Bill Hammond, Kurt Vonnegut, Christine Jeffs and Carol Ann Duffy.

The title of the record, ‘The Mapmaker’s Art,’ is a reflection of the fact that most of the songs are about movement, getting from on place to another.  Sam says ‘we draw a map to describe a place we’ve been, a place that existed before us and continues to exist without us.  The art of the mapmaker is to describe a place to someone else so they can get there and back with a minimum of fuss.  Needless to say, most of the places I describe on this album are not really real, but I invite you to come and visit them just the same.’

“The debut album from Aucklander Sam Prebble is one of the finest collections of new homegrown music to cross this desk in a while.The Mapmaker’s Art is an album of wistful, pensive stories spread coyly over a bed of introspective indie folk, string arrangements, subtle electronic flourishes and dreamy mandolins.  Fans of SJD and the story-telling style of Don McGLashan will find favourite elements of those two esteemed artists entwined on the Mapmaker’s Art as Prebble weaves his engaging and curious narrative.  The salient track is the bnet single ‘black market soul transplant,’ a sparse yetyet delicately textured track driven by brooding steel guitar – a great song that laments the “stitches down my side where my soul used to be.” The swampy and melodic bluegrass of ‘the nature of the blues’ is another highlight from Prebble, who might be known to music fans through his work with White Swan Black Swan and Reb Fountain’s band the Bandits.  The Mapmaker’s Art is an album that commands attention and will reward the listener with a joyously cinematic listening experience.”
**** (four stars).  Phil Reed, Real Groove