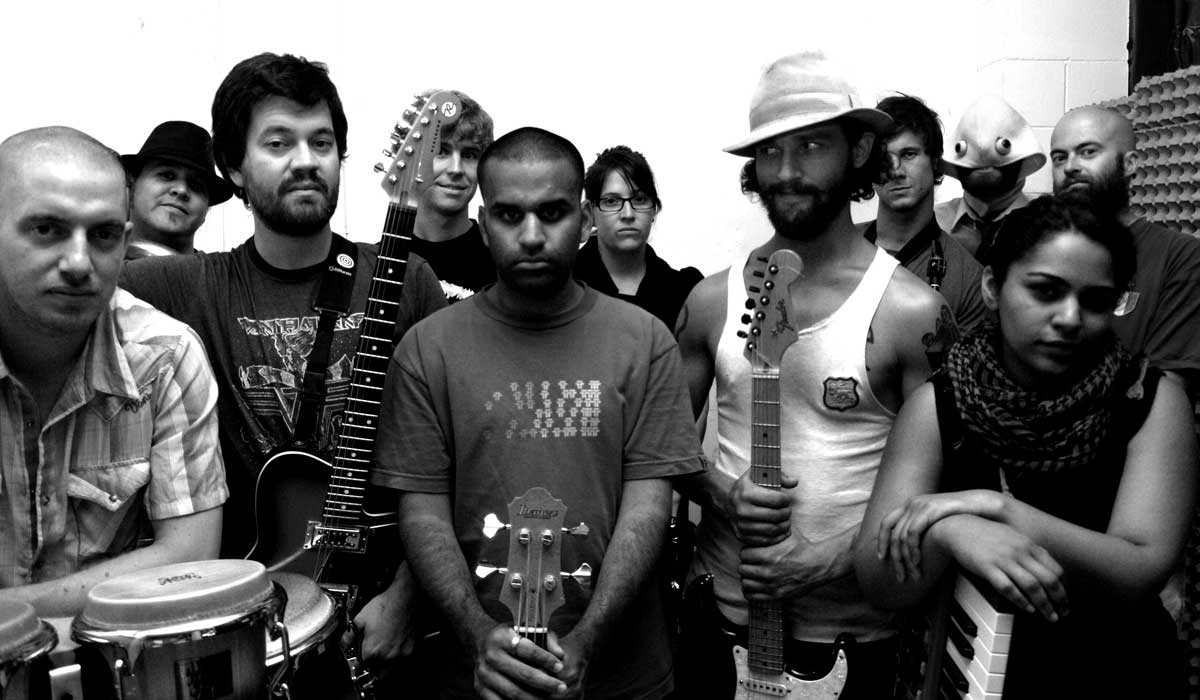 The Hot Grits released their long awaited debut full-length album ‘It’s Too Drunk To Be This Early’ on Monkey Records mid 2008. The first single from the album, The Ballad of Joe Stalin, achieved considerable airplay across the bNet, incuding several weeks at no. 1 on Auckland’s bFM and the second single ‘Headlights’ recently reached the top spot on the Kiwi FM charts. The album debuted at no.7 on the National Independent Chart for the Month of May and the controversial video for Headlights (banned by TVNZ)was playlisted on music television nationwide. Following three highly successful national tours in 2008 and a busy summer playing at Matakana, Prana, Parihaka, Picton Martitme and AK09 Festivals, the Hot Grits are ready to take on the world.

Style: Afro Soul
What do you get if you mix a pound of Fela Kuti’s Afrika 70, two cupfuls of The Meters, 250g of thinly sliced early James Brown and a level dessert spoon of psychedelic rock? -you get the heaving, convulsing powerhouse of soul music that is The Hot Grits.

For over five years, The Hot Grits electrified club dancefloors and festival stages around New Zealand with an eclectic, take no prisoners approach to soul and afrobeat music. When THG hit their stride, no-one in the room is immune from the power and sheer soulfulness of their groove, and band and audience become one in a giant, convulsing testament to the power of good music. The overall Hot Grits sound is funky and deep, but always powerful and never too smooth.

The Hot Grits have steadily evolved into a powerhouse live outfit, capable of packing out venues and creating havoc on any dancefloor. Highlights have included playing to several thousand people at 95bfm’s Summer Series concerts in Albert Park, bringing the house down at the Wintergarden theatre during AK03 and AK05, and rocking festivals from Grey Lynn and Waiheke to the Coromandel and Nelson. Along the way, THG have shared bills with a diverse array of New Zelaand’s finest acts, including Pluto, Goldenhorse, City Newton Bombers, North Shore Pony Club, One Million Dollars, King Kapisi, Greg Johnson, The Sneaks and The Phoenix Foundation.

The current Hot Grits lineup consists of no fewer than eleven very talented musicians from such varied backgrounds as jazz, hardcore, metal, reggae, hip hop and big band. Alistair Deverick (The Shades) holds the whole operation together with his supple breakbeat drumming, abetted by the fat, soulful bass of Marlon Lobo. Nick Wood (Payola) and Trygve Wakenshaw round out the rhythm section on percussion, giving a thick rhythmic drive to the band’s powerhouse engine room. Martin Sutcliffe (The Defendants) keeps everything tight on guitar, and Nisha Madham’s keys bed everything down in a warm hammond glow. Shaun O’Kane adds fluid saxophone lines to the power trombone of James A’Hara and the deep baritone sax of Ben McNichol. Atop this veritable mountain of sound rides the Hot Grits’ two vocalists, Barnie Duncan and Elitia Clark. Barnie is an incendiary performer who can push a crowd (and himself) to the absolute limits of funkiness and Elitia provides both sensual soul and sheer power.

It’s Too Drunk to Be this Early is a fantastic (and long awaited, for those following the band) slice of Fela Kuti-derived funk. The sharp horn blasts sit inside a bed of percussion (two conga players and a drummer) and Marlon Lobo’s fat, heavy bass guides the choppy guitars and keyboards on this good ship funk. With 11 members, The Hot Grits trade vocal styles, shifting between Barnie Duncan’s good-time party vibe and the after-hours soul of Elitia Clarke. And though Kuti and James Brown would seem the obvious references, you can also hear the subverted sound of early Talking Heads and the Brian Eno collaborations”. ★★★★★
Simon Sweetman, The Dominion Post

“You could be forgiven for looking a little vague when I mention The Hot Grits to you. Well it’s up to you to remedy this as soon as you can – get the album, catch them live, just do something dammit. This eleven piece (that’s right…. eleven) from Auckland have an ‘Afro Soul’ sound that is equal parts funk, soul and power. You’d expect the power when you have such a large band to call on and this is definitely to the fore on the first two singles, ‘The Ballad of Joe Stalin’ and ‘Headlights’. These tracks are notable for their driving rhythms, horns and fantastic vocals from Barnie Duncan, all layered over a psychedelic base.
But just when you think they might be a one trick pony, the album is rounded off with Elitia Clark stealing the show on ‘Deep Threat’, this track is pure soul from start to finish. And not content to finish things off there, the band strip it back even further with ‘Syntax’, a smooth groove which provides the necessary chill-out before you hit play all over again. The Hot Grits have just dropped an absolutely stonking album, let’s just hope the world finds out about it.”
Bullet Mag